Working Class Heroes: It's Up to Us to End Capitalism 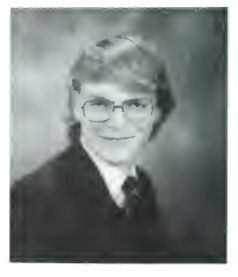 First there was the Universe. Then there was Markus. From then on this planet (Earth) was one of the most important things in life (his life). Then he went to SMU. This in and of itself was not very important - but while going there, he noticed many things about life which he did not like. These were mainly small things, such as holes in the ozone layer of the atmosphere, acid rain and projected populations for Earth. Having decided to change all this, he found that he already had the solution; the only problem was that he would have to become a V.V.I.P. (very, very important person) in the scientific field to implement it - and to know just about everything there is to know about this world. He is planning to start by learning everything about engineering or computers, and continue from there.

That's an excerpt from my partner's grad write-up in his 1988 school yearbook. He tells me he must have just finished reading the Hitchhiker's Guide to the Galaxy, and adapted his writing-style, accordingly. He also tells me it sounds pompous. My partner is anything but pompous. He's just lost all the confidence he had in highschool; he doesn't think he can save the world, anymore.
The list of devastating global circumstances facing humanity has played out even faster than we 80's kids could have imagined, and we feel helpless. My partner did go on to study physics and engineering, eventually getting his degree in Computer Science. He now goes to work every day, finds, fixes and creates bugs in software that is used all over the world for resource management. Some of this 'resource management' is towards protecting the ecological welfare of the planet; a lot of it is simply management for destructive capitalist ventures. My partner does whatever he is told to do. Then he comes home exhausted, eats dinner, pets the dog, plays accordion, and goes to sleep, only to get up in the morning and start again. On weekends and vacations he sometimes makes adventures to soothe his tired soul; mostly he works at replacing our old house with less mouldy materials, hoping that at least his efforts will provide shelter for his family. Dreams of saving the world went away a long, long time ago. Shelter and survival in the capitalist world is his current goal.
Does it sound like drudgery? He would say no. Because he's living the dream we were all fed as children, and in fact he's doing better than that: He's raising free-thinking unschooled children in a park-like setting, hoping they'll have the guts and wherewithal to follow their own dreams in a way he never managed to do.
But wait - that's what his parents were doing too! They sent him to the best school they could find, where he learned to fly airplanes, wear a suit, and feel confident that he really could grow up to be a very, very important person in a scientific field and change the world. But he didn't. Why not?
Why do all of us hope that our children will grow up to change the world, and not change it ourselves? Somehow we seem to feel that we can trudge into the capitalist system that requires our compliance and still raise kids who will magically end up elsewhere. Why on earth would they? We ask our children to follow their hearts and at the same time we tell them to follow our culture's mandated path to adulthood. We expect them to be different and brave and to change the world and save us from the disaster that capitalism has caused (seriously - if you haven't already, go read that article and watch the video), but we're too afraid to get out of the system, ourselves. They will be, too.
John Lennon wrote in his song Working Class Hero: (full lyrics and song video here)
When they've tortured and scared you for twenty-odd years
Then they expect you to pick a career
When you can't really function you're so full of fear
A working class hero is something to be
A working class hero is something to be


Our kids follow our lead. Unless we break this cycle, our children, like us, will reach adulthood and discover that the only feasible path is the one their parents took, and they will have children themselves, and they will hope that their children will save them. And with every generation the outlook is bleaker, and with every generation we hope the next will save us.
Capitalism is killing us. Our school system is part of it. Our work ethic and career paths are part of it. Our diet and housing and everything that we consider to be essential is part of it. These things need to change, and we need to change them. Not our children or our children's children. There is no more time for us to live in fear. And there is no point hoping that the few brave souls who unschool their kids or drop out of the system or attend rallies will do the work for us. There will be no new reality until we all jump on board. We are killing ourselves with capitalism and we have to stop, now.
at February 21, 2019 No comments: